Elebaires does a Bar Tour through Buenos Aires!

Last week the students went on a bar tour to a few of the well-known, historical bars in Buenos Aires. We were lucky enough to have our very own tour guide, Sander, who is very knowledge about the history and background to each of the bar. At each bar, he gave us a bit of information and facts about the place where we were having a drink, which made the whole experience a lot more engaging and interesting. 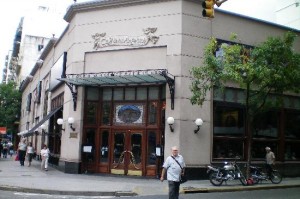 In the afternoon we all met at school and went to the first bar, El Café de los Angelitos. This is a historical tango café, which functions as a normal café during the day and offers a supper accompanied by an impressive tango show during the evening. Here, we started off the tour by ordering coffees and submarinos (this is a glass of hot milk served with a bar of dark chocolate which you stir into the milk making hot chocolate!).

It was opened in 1890 and shortly after became the meeting area for lower class people who engaged in unlawabiding activites. They paid off the police so that they would not disturb them, thus ironically giving them the name “anglitos” (little angels). 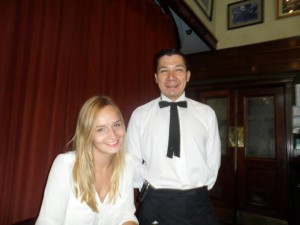 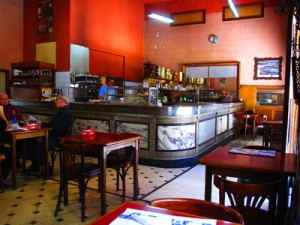 We walked to the next bar, La Embajada, which is a small bar with heavy Hispanic influences. It has remained almost the same as the original so gives off a very authentic feel. With wooden tables, Viennese chairs and a tiled mosaic floor, when you enter it feels like you are going back in time. 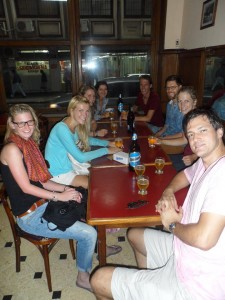 When we walked in there were only a few older men sitting in the bar and it seemed like everyone knew each other. It was a real family atmosphere as if they go there to reminisce and remember their Hispanic roots. In this bar, we moved onto “cerveza” (beer) and order a few bottles of the typical Argentine beer, Quilmes. 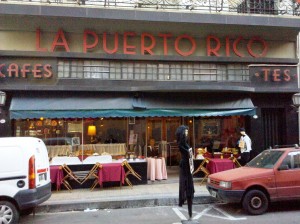 Our next stop was La Puerto Rico. We had a long table in the middle of the bar, just in front of a stage, which used to be for flamengo shows. As soon as we entered you could see the incredible array of different cakes and “dulces” on offer. There is a table by the window at the front where Papa Francisco (the current Pope) used to go and sit to have his breakfast of medialunas and a coffee before he was elected as Pope. 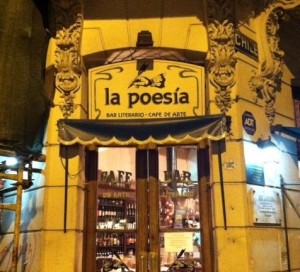 The bar is located just off a beautiful cobbled street in San Telmo. It is named La Poesia (the poet) as writers and poets used to congregate there to share ideas and write their works. Hung up on the walls are many photos of the different writers who used to go to this bar. 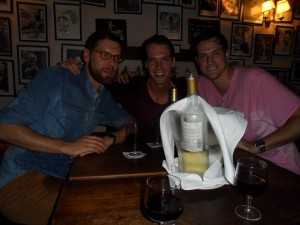 Sander suggested moving onto wine here as it served well-known wines and also it had been raining outside as we were walking so we were all feeling a good red wine to warm us up! 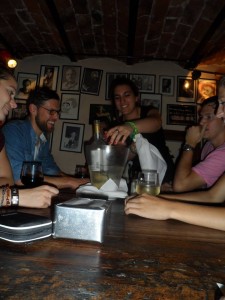 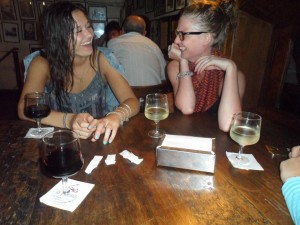 After our last toast in the last bar, we gave a big round of applause to our guide, Sander! It was a really fun tour whilst learning a lot about the history of the bars in Buenos Aires. A walking bar tour is a perfect way to get to know the city and immerse yourself in the culture of the city!