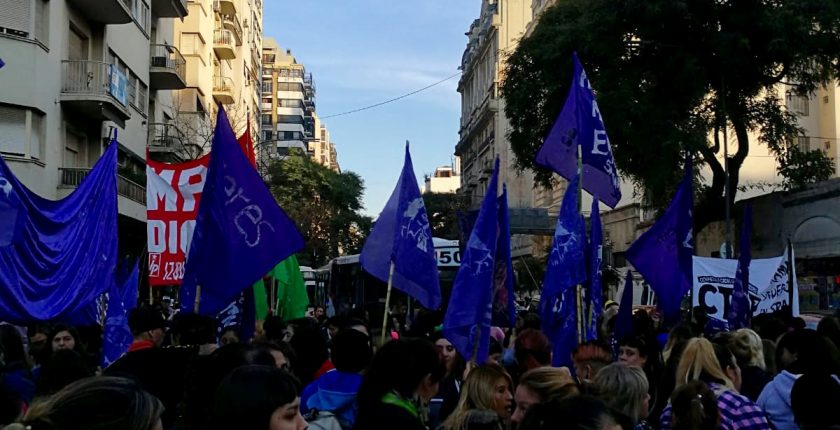 The weekly excursions with Marina are the best way to explore the city with a local in order to practice Spanish naturally. On the 3rd of June, we made our way to the Congreso (congress) as thousands of women and men marched from there to the famous Plaza de Mayo in Buenos Aires to protest violence against women and sexism. Political activism and engagement is wide-spread and apparent in Argentina’s society.

Twenty artists, journalists, and activist started the movement Ni Una Menos in 2015 after a number of terrible murder cases of women caused nationwide outrage. Since then they organized dozens of protest, public readings and political campaigns. The movement grew rapidly in numbers over the years and is aiming to achieve significant political change. One of the main goals is to legalize “safe, legal and free” abortions in Argentina. Until now abortion is only decriminalized if the mother’s health is at risk, or the pregnancy results from rape. Therefore, thousands of illegal abortions are conducted every year in Argentina, as estimated by various NGO’s, with the only other alternative being to try and get a safe and legal abortion abroad.

A respective bill passed the Congress in August 2018 but was afterwards rejected by the Senate, the second chamber of the Argentinean democracy. However, a new push is already underway to legalize abortion in the near future. The demonstrations are vocal but peaceful and it is clear to see the political engagement of Argentina’s people. However, the country is chronically struggling to achieve economical and political stability. On the 27th of October, Argentina will vote again for a new president, members of congress, and governors of most provinces. The outcome seems very unpredictable so far, however, one thing is certain that the women of Argentina will continue to fight for equality and against gender-based violence!

During our visit to the congress and through discussions with people on the street, we have learned much more than that over the feelings and opinions of Argentineans, and the political situation of Argentina. The city tours with the lovely Marina are a great extension of the normal classes and let you experience the city and its people like a true Argentinean.