Elebaires Spanish Language School > Blog > Uncategorized > The Story of Mafalda: The girl, the myth, the legend

The Story of Mafalda: The girl, the myth, the legend 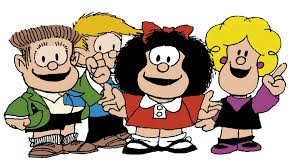 If you have ever strolled down the streets of San Telmo, you may have noticed some life sized figurines sitting on a bench or ‘walking’ amongst you. Those characters are from the legendary comic called Mafalda. Mafalda, a young 6 year old girl, is a historical and legendary icon whos popularity spread outside of her home country (Argentina), and given innocent commentary on historical, political, and current issues from her humanist perspective.

Mafalda’s humble beginnings started as an advertising tool. The purpose of her creation and comic strip was to strategically use product placement to advertise a new line of appliances. The plan was to make people fall in love with the girl and the comic strip first, and then as they noticed that these appliances were in every comic strip, they would trust Mafalda enough want them too. However, no magazine was fooled by this sneaky scheme and Mafalda was finally accepted by one magazine who would publish the comic as long as the advertising was taken out of it.

The comic was published for 9 years and was moved to and from various newspapers in that time. After those years, the author would occasionally break her out for commentary on a political or human rights issue.

The comic follows a middle-class Argentinean six-year-old’s trials and tribulations. Her storylines have subtle social, political, and human-rights themes and the way she expresses herself makes the comic entertaining, while also commenting on real life issues from the perspective of a child; understandable and humanistic. That is why she is such an icon and deeply beloved by many.